Two veterans of the hospitality industry have been hired to lead the new venture, called the Hawthorn 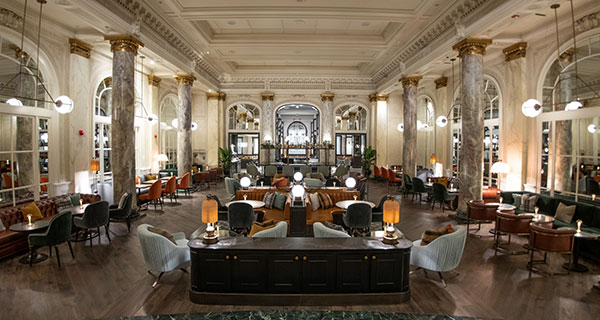 It’s not all doom and gloom for Calgary’s restaurant industry – while food establishments have closed recently, others are opening their doors.

The latest is the Hawthorn Dining Room & Bar, which officially opened on Tuesday in the iconic Fairmont Palliser Hotel in downtown Calgary.

And two veterans of the hospitality industry have been hired to lead the new venture – Bern Glatz is the executive chef and Dustin Makarenko is the general manager.

“I’m excited to be working with the Hawthorn team because of their above and beyond willingness to support local,” said Glatz. “I’m able to utilize some of the best local farmers and suppliers in Alberta, and create a menu that truly reflects the spirit of Calgary.”

It’s been more than 60 years since a new food outlet was added to the Fairmont Palliser.

The Hawthorn has a modern and stylish look after a redesign courtesy of Calgary’s FRANK Architecture and Interiors. Hints of the hotel’s beginnings as the central rail station – such as Charles Beil’s 1962 mural the Heraldic Badge and a much-loved fireplace – continue to be central parts of the space. “These features are now accompanied by rich, vintage-inspired details intended to give patrons a feeling of approachable luxury and comfort,” says restaurant literature.

The Hawthorn is in the space once occupied by the Rimrock restaurant. The old Oak Room lounge is now a banquet space.

“The existing restaurant that was here before had quite the following. We have a lot of loyal employees as well as loyal guests, so we feel quite confident with everything we’re doing – the sustainability, the rotating menus, bringing a free-standing restaurant, chefs and managers – that we’re not only going to capture our hotel guests but most importantly take a piece out of the Calgary dining scene,” said Makarenko.

Mario Toneguzzi is a Troy Media business reporter based in Calgary.