Marie Henein is unapologetic and controversial, largely due to her defence of Jian Ghomeshi

If you buy criminal defence lawyer Marie Henein’s new memoir hoping for the inside scoop on her high profile cases, you’ll be disappointed. Ethically, she considers those details off limits, confined there by the parameters of the lawyer-client relationship.

However interesting the stories might be, Henein believes they aren’t hers to tell. They belong to the clients, some of whom may want to relive them, while others want nothing more than to put the trauma and pain behind them.

Still, the memoir – Nothing But The Truth – is well worth a read. It provides an insight into what makes one of Canada’s top criminal defence lawyers tick. Driven, opinionated and unapologetic, Henein is, to quote the late Christie Blatchford, “formidable.”

In one of the country’s most publicized sexual assault trials of recent years, it was Henein’s meticulously devastating cross-examinations that exposed what the judge subsequently described as the “deceptive” and “manipulative” testimony of the complainants. That rendered their evidence essentially useless and Ghomeshi’s acquittal inevitable.

For this, Henein was pilloried as a betrayer of women.

While she doesn’t dwell on it at any great length, Henein is clearly neither amused nor impressed with some of the ensuing goings-on.

Speaking to university students on campus can be particularly annoying.

There’d be the usual objections to her presence, invariably followed by an introduction going to great lengths to explain or justify why she was there. One institution even “went so far as to make counsellors available in the lecture hall where I was speaking and preceded my introduction with the requisite trigger warnings.”

Even then, she believes that because of the vast resources the state has at its disposal, the defence cross-examination is “like bringing a knife to a gun fight.” 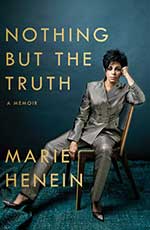 Henein is passionate about criminal law and her vocation as a criminal defence lawyer. The presumption of innocence is for everyone, not just people we like or approve of. The right to a defence is inseparable from that presumption and it’s the ethical responsibility of the lawyer to mount as effective a defence as is feasible.

A criminal trial, she believes, is about answering a single question: Has the state proved its case beyond a reasonable doubt? Given the high stakes for the accused, no other consideration – social, political or whatever – should be relevant to the process.

Henein also writes about how shell-shocked her clients are when “the full machinery of the government” comes bearing down on them. They’re invariably astonished at how little it can take to charge a person. In her assessment, “The threshold for the police to criminally charge someone is relatively low, and investigative acumen is a wide variable.” In other words, the presence of smoke doesn’t necessarily denote a fire.

Then there’s the power of social media, which Henein worries about. She uses the term “digital mob.”

Whereas dissemination of courtroom happenings was once filtered through court reporters and a far less intense news cycle, now “anyone, anywhere, can comment on what is happening in a trial without stepping foot in the courtroom, and these opinions can be consumed by millions of people within minutes.”

Once upon a time, joining a mob required physical engagement. Now it can be done with a few keystrokes and complete anonymity. Whether guilty or innocent, the target’s reputation can be shredded, and their livelihood destroyed or at least permanently damaged.

In theory, the justice system should be immune to this. But that’s not necessarily so.

After all, the participants are human and thus vulnerable to what they perceive as public opinion. Doing your job in the face of outraged demands for ‘justice’ requires more than smarts. Integrity and backbone are also needed.

The book, however, is about a lot more than Henein’s perspective on the justice system. As befits a memoir, it talks at length about her and what things are personally important. The experience of her family as immigrants from Egypt is a thread that runs throughout.

Whatever your view, you’ll understand her better after reading the book.