Fast and mesmerizing or slow and memorized

Sayonara Wild Hearts is the best Apple Arcade game I’ve played so far. And Tales of Memo isn’t bad either

I’m back! The fourth edition of my Apple Arcade reviews! No time to waste.

This time we’re taking a look at Tendays Studio’s take on memory games with Tales of Memo, as well as the incredible, beautiful Sayonara Wild Hearts.

You can see the first article here, the second one here and the third one here. 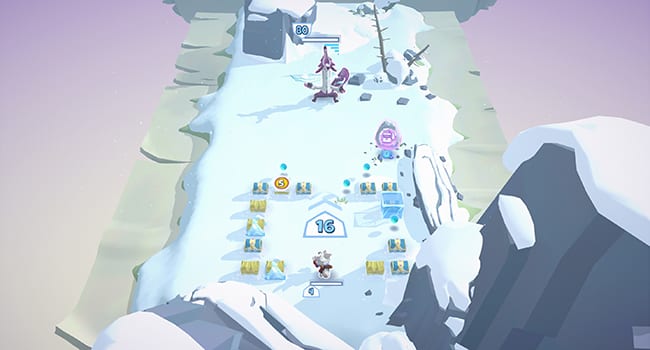 Tales of Memo is a memory-matching game with some added bells and whistles.

You play as a small white wolf (I think) who’s saving the land from an unseasonable winter. Complete a level and the snow is pushed back from your lush forest home.

Each level presents you with an enemy at the other end of the screen and a bunch of treasure chests in between. Open a chest and it reveals a number. Open two of the same number and the matching pair can be used to deal that amount of damage on the enemy. Meanwhile, the enemy will attack you or thwart you in other ways, like turning some chests to ice, rearranging their placement and more.

Tales of Memo adds mechanics steadily through the beginning but seemed to slow down a little by the time I put it down. That felt like the right place to ease off because it was just getting to the point where there were enough things going on that it became a fun challenge but I needed more practice to be able to skilfully handle everything that was happening.

Some boxes will multiply the damage you can do, others are mysteries that reveal themselves only when you find a matching mystery box. These, combined with box placement and enemy actions, provided some good variety.

Unfortunately, I ran into some performance issues while playing Tales of Memo on the Apple TV. Frame rate really chugged in a few spots and there was one place, close to the beginning, where the game locked. Twice!

As has been so often the case with Apple Arcade games, controller support was not great. This is the kind of game that would be better on a touch device. Using my PS4 controller felt sluggish, which was a detriment in a game where you’re under the gun to search, match, and defend yourself from incoming attacks, all requiring a certain amount of haste and agility.

The art direction and audio both felt pretty uninspired, just some basic environmental and musical trappings to help smooth the way from level to level. Not every game has to focus on such things in great detail but Tales of Memo sets a fairly low bar.

Despite the shortcomings, the way the mechanics layer on each other atop the core memory game works well, providing a fun challenge. I won’t keep playing but that’s mostly because memory games aren’t my thing. But I see the value in it, especially if they are your thing and you’re playing on a touch device.

Tales of Memo is fun in small doses but is basically an interesting time-killer. That’s great if that’s what you’re looking for. 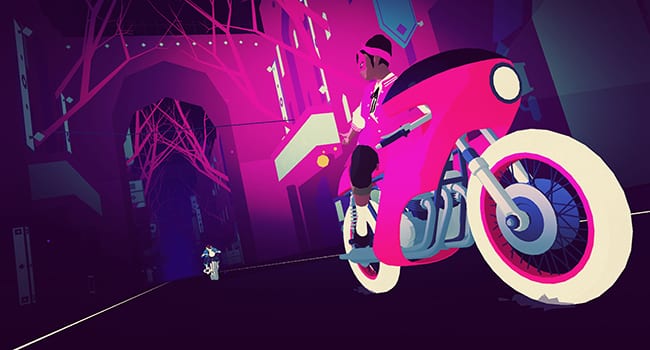 Sayonara Wild Hearts is a frenetic, thrilling game that pulses with vibrant pop music – and the music is good.

Astride your motorbike, you race through wild, psychedelic neon streets in a crumbling world, leaving a trail of broken-hearted in your wake.

You collect hearts for points, which go towards a ranking at the end of each level. Completing the levels is never too challenging – the real challenge is attaining that gold rank for each. If you collide with something, the game immediately starts you at a recent checkpoint, so there’s no stopping.

The visual style is bright and entrancing; blues, pinks and purples popping against a dark background. Sayonara Wild Hearts moves so fast that you can’t take everything in, but the continuous stream of big, beautiful colours and crazy crumbling set pieces is mesmerizing.

I mentioned how great the music was but the songs aren’t just an accompaniment. Each goes perfectly with the level you’re playing. In one instance, you’re riding your bike and on a music cue, you leap off the bike and fly freely through the air, the music reaching an uplifting crescendo. Each level feels more like you’re playing a music video, one piece of a continuous narrative.

Despite my best descriptive attempts, I’m not sure I can do the game justice. Better if you have a look (and listen) for yourself here.

While much of the game is played on your motorcycle racing through streets (and other environments), Sayonara Wild Hearts isn’t afraid to mix this up with several other methods of transportation – like soaring through subspace on a tarot card. Things will often change in the middle of a level, like the aforementioned free-flying portion. You’re on your bike one second, then you’ve hopped onto a mini glider, then back on your bike, which now has lasers.

Perspective changes constantly from third-person to first-person to a side profile of you facing off against your current nemesis/lover. All these things are changing and moving quickly but the game, and the music, never miss a beat. It’s all completely seamless.

By now, I’ve played several Apple Arcade games, more than I’ve yet to review. Sayonara Wild Hearts is the most pure fun I’ve had. The visuals, music and game play come together to make a beautiful package.

This one is my highest recommendation thus far and has attained the coveted, just-now-invented rank of Sam’s Way Today Play (working title).

And with that, I have some more psychedelic biking to do, sans actual psychedelics.