Business analysts and economic development agencies understand that the presence of corporate head offices brings many benefits to cities and regions. The Metro Vancouver region needs to improve in this area.

Not only do large companies and fast-growing mid-sized firms directly support high-paying jobs, they also help to sustain employment in other local industries that sell goods and services to the head office sector – law and accounting firms; suppliers of financial, engineering, transportation and environmental services; and recruitment and public relations specialists.

There are many reasons why policy-makers and other community leaders should seek to develop a robust head office cluster.

This is one area where Metro Vancouver has long been a mediocre performer. Over the last 25 years, the region has seen the disappearance of numerous large businesses due to consolidation in industries like mining and forestry, takeovers of B.C. firms that subsequently shed local jobs, and the occasional relocation of companies to other jurisdictions.

Fortunately, this has been offset to a significant extent by the growth of other B.C. enterprises, which have evolved from small businesses to much larger organizations.

But overall Greater Vancouver has struggled to expand the head office sector. 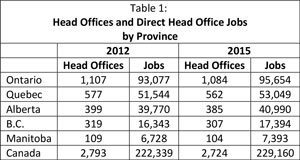 Table 1 shows the number of head offices and direct head office employment in the five biggest provinces for 2012 and 2015. Table 2 does the same for major Canadian metro areas. A few points are worth noting: 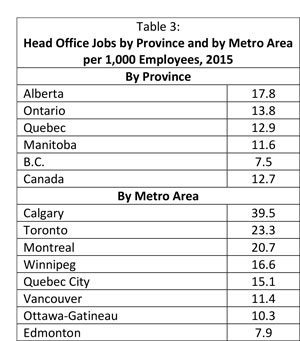 Another way to gauge the success of a city or a province as a location for corporate headquarters is to measure head office jobs relative to total employment. As Table 3 shows, both British Columbia and Metro Vancouver punch below their weight in head office jobs, compared to other provinces and most competing Canadian metros. Alberta and Calgary perform exceptionally well in this area, reflecting the concentration of energy-related businesses in the province and the city.

All of this underscores the need for an increased focus by policy-makers in B.C. and Metro Vancouver on growing more locally-based companies and attracting firms from elsewhere.

Success in this domain would produce sizable economic dividends for the province and region.

Jock is a Troy Media Thought Leader. Why aren’t you?

One Response to "B.C. must develop a stronger corporate head office presence"