Alberta vies with P.E.I. to be potato capital of Canada 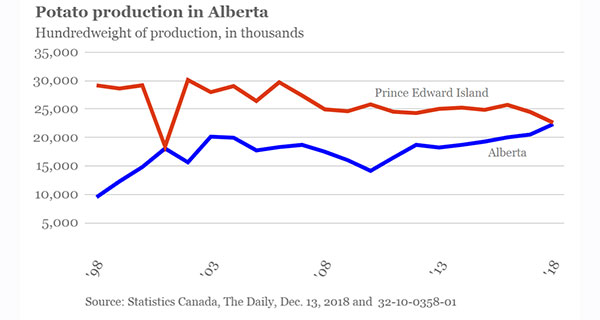 This spud’s for you, Alberta.

ATB Financial’s Economics & Research Team said on Monday that although the potato capital of Canada has historically been Prince Edward Island, there’s a change afoot.

Alberta is now running neck and neck with P.E.I.

“Alberta’s potato production grew again in 2018, and is now virtually tied with P.E.I. at more than 2.23 billion pounds,” said ATB in its Daily Owl publication.

“The burgeoning production of potatoes in Alberta demonstrates growing economic diversity in the province. Along with a few other notable crops (particularly cannabis), Alberta’s agriculture and agri-food industry continues to perform well. This is especially welcome news against the backdrop of an energy sector that continues to struggle,” it said.

“Production of vegetables, including potatoes, is likely to expand in 2019 and beyond. Investments in new food manufacturing facilities, such as the new Cavendish Farms processing plant in Lethbridge that’s expected to be completed by the fall of 2019, will encourage more production.”