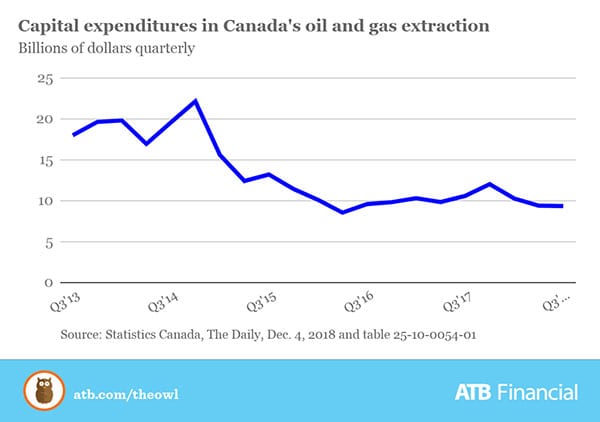 The news from the oil patch continues to raise concerns across Alberta and Canada.

The latest is the revelation that capital expenditure in the oil patch, a driving force of the national and provincial economies, is falling again.

ATB Financial’s Economics & Research Team on Thursday released data from Statistics Canada indicating that there were “whispers of guarded optimism” for the oil and gas sector at the beginning of 2018, when capital expenditures rose above $12 billion in the final quarter of 2017. But that has changed.

“Total capital spending on oil and gas extraction in Canada was $9.3 billion in the third quarter of this year. That’s the second lowest quarterly total in the last five years and the third consecutive quarterly decline,” says the ATB report. “From the recent peak at the end of 2017, capital spending is down 22 per cent. From the all-time peak at the end of 2014, spending has been cut by more than half (-58 per cent).

“Statistics Canada notes that part of the reason for the decline is the completion of major projects,” the report continues. “Clearly, the low price environment and the gaping differential between the West Texas benchmark price and the Western Canadian select price is also to blame.

“The data are for the entire Canadian oil and gas industry, so other energy-rich provinces like Saskatchewan and Newfoundland and Labrador are also feeling the pain. But Alberta is the heart of Canada’s oil patch. If prices and the investment climate don’t improve soon, the declines this year could be followed by more in the future.”