Five ways we can reduce suicide in Canada

Why a suicide prevention strategy needs to include personal injury prevention 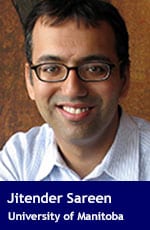 Canadian rates of suicide and attempted suicide have remained largely unchanged over the last several decades. But we have seen increasing rates of suicide in the Canadian military recently, after stable rates for decades.

Over 40,000 Canadian soldiers were deployed in Afghanistan, so there has been an understandable concern about mental health problems and suicides among military personnel and veterans. Both the minister of Defence and minister of Veterans Affairs have rightly made suicide prevention a top priority.

The problem of suicide is not limited to the military in Canada; indigenous populations, especially in northern remote communities, have high rates of suicide.

We need a unified approach across provincial and federal sectors to reduce suicides in the military, among veterans and civilians. Here are five promising evidence-based strategies for suicide prevention.

The single most important predictor of future suicide attempts is a history of self-harm. It is important to develop a confidential national registry of people with self-harm behaviour, in order to record accurate data, and target and measure ways to reduce the risk of future attempts. A similar registry exists in Ireland.

For patients who attempt suicide, current practices and programs focus on treating the underlying mental health problem and/or addiction. Recent work challenges this by showing that there is also a need for psychological interventions that directly address suicidal behaviour. Two treatments appear to reduce suicide attempts among people with a history of self-harm – cognitive behaviour therapy and dialectical behaviour therapy.

Both focus on understanding the causes of suicidal thoughts, improving coping skills in managing distressing emotions and developing careful plans to reduce future attempts. Strong national investments are needed to make these therapies available for people with a history of self-harm.

This provides the greatest evidence for suicide prevention. Suicide is often an impulsive act. Access to firearms is a factor in half of the completed suicides in the United States.

In the Swiss military, when access to guns was reduced, almost 80 per cent of people were deterred from suicide. Although firearm-related deaths are less common in Canada, 20 per cent of male suicides in Canada are related to firearms.

In the U.K., limiting pack sizes of Tylenol per bottle also reduced suicide. In Canada, prescription medications, especially opioids, anti-anxiety and anti-depressant medications are common causes of both intentional and unintentional deaths. Limiting access to large quantities of prescription and over-the-counter medications for people with a history of self-harm may reduce suicides and accidental deaths.

Accidental or undetermined deaths look like suicides. We know that suicide rates around the world are widely underestimated, perhaps by 30 per cent or more. It is often difficult to determine the nature of a death, and whether it is definitively a suicide or an accident. Often, the coroner classifies the death as undetermined.

Evidence indicates that some mechanisms of suicide are more likely to lead to the undetermined classification. In the U.K., injury deaths of undetermined intent are routinely included in suicide statistics for this reason.

We have learned that individuals dying by either suicide or accident share many risk factors. They include those who are male, of younger age, unmarried, having lower education and income, being impulsive, or suffering mental health problems and addictions.

Generally speaking, prevention efforts for accidental injuries and suicide are distinct. But given the shared vulnerability of these populations, along with the finding that many of the accidental or undetermined deaths may be misclassified suicide deaths, a broader approach to suicide prevention must include injury prevention.

If we really want to change the rates of suicide in Canada, we need to look at areas of medicine that have successfully reduced mortality. For example, HIV prevention and cancer prevention have created national registries and invested heavily in innovative prevention programs that specifically target these deadly diseases.

Jitender and Cara are Troy Media contributors. Why aren’t you?