A national housing strategy will save Canadian lives

By Tim Richter on September 28, 2016Comments Off on A national housing strategy will save Canadian lives

Not having a home can be lethal – homelessness causes premature death, poor health and is a significant burden on our health-care system 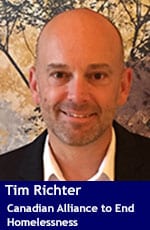 Beyond a crisis of housing and poverty, homelessness is a public health emergency. The longer people are homeless, the worse their health becomes.

In emergency rooms and frontline clinics, patients are triaged based on urgency. A high-quality health system would connect these efforts to a larger plan to prevent illness and keep people healthy.

Unfortunately, in Canada, we aren’t there yet.

One of the biggest factors is where people live. Those without access to stable housing are at higher risk of illness and their likelihood of recovering well is greatly diminished.

According to the newly-released National Shelter Study, Canada’s emergency shelters are packed to the rafters. People languish in homelessness longer, and their ranks increasingly include seniors, veterans and families with children. Shamefully, indigenous Canadians are over 10 times more likely than non-non-indigenous people to end up in emergency shelter.

The report paints only a partial picture of homelessness in Canada, including only emergency shelters.

The sad reality is that more than 35,000 Canadians are homeless on a given night, with more than 235,000 Canadians experiencing homelessness at some point every year. They sleep in shelters, on the street, couch surf, and wait unnecessarily in hospital or other temporary accommodation.

A recent report from B.C. suggests life expectancy for homeless people in that province is half that of other British Columbians.

Some physicians have gone so far as to label homelessness a palliative diagnosis. Not having a home can be lethal. Homelessness causes premature death, poor health and is a significant burden on our health-care system.

The crisis stands to get worse before it gets better, as federal operating agreements for older social housing expire and over 300,000 more households could lose the subsidies that keep their housing affordable.

Canada’s homelessness crisis is the direct result of this federal withdrawal from housing investment.

The new Liberal government promised a national housing strategy and has begun consultations. According to the federal minister responsible for this new strategy, Jean-Yves Duclos, “the Government of Canada believes that all Canadians deserve access to housing that meets their needs and that they can afford.”

Solving all of Canada’s housing problems at once, from homelessness to the rising cost of home ownership, would be wonderful. But the sheer scale of the challenge, when set against political and fiscal realities, will force the government to make some difficult choices, acknowledges Canada Mortgage and Housing Corp. president and CEO Evan Siddall.

To make the difficult choices, the government should take a page from medicine and triage.

The most pressing problem – finding stable housing for those who are homeless or at risk for homelessness – can be solved. Start by collecting real-time, person-specific data on homelessness and expand supportive housing for individuals with greater challenges. Housing First, an evidence-based approach to ending homelessness, provides direct access to permanent housing and support. Add to this better co-ordination in local planning, targeted investment in affordable rental housing and a national housing benefit, and homelessness in Canada could become rare, brief and non-recurring.

Not only would this take care of those most in need, it would also make available more funds to address challenges further upstream. The savings from shelters and emergency rooms could be applied to the next steps of providing more affordable social housing, preventing more people from falling into homelessness.

A national strategy can give all Canadians access to safe, decent and affordable housing. The first step to reaching that goal is urgent action to house Canadians experiencing or at risk for homelessness.

Tim Richter is the president and CEO of the Canadian Alliance to End Homelessness, a national movement of individuals, organizations and communities working to end homelessness in Canada.

Tim is a Troy Media Thought Leader. Why aren’t you?