More money for health care is not the answer

By Allan Maslove on January 15, 2016Comments Off on More money for health care is not the answer 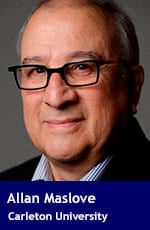 In the Speech from the Throne and since, the Trudeau government has clearly said it is ready to re-engage with the provinces and territories on health care. This is a welcome development, especially after the Harper government’s unwillingness to provide any leadership or even play a secondary role in health care reform.

But even though the Trudeau government is ready to work with the provinces, the prospect has likely raised many expectations of what new arrangements might emerge.

First, many players will be looking for more money from Ottawa to the provinces. But the Harper government, even as it withdrew from active participation, had already committed to adequate transfers to the provinces until 2024. There may be legitimate debates about the distribution of those transfers across the provinces, and there may be some new funding called for to support new initiatives in areas such as pharmacare or mental health, but the federal money now on the table in support of the range of health care services is more or less adequate.

The health care problems we face are not the result of insufficient spending. In fact, more money may be counterproductive.

The primary focus of any new accord needs to be on the structure of the federal-provincial arrangements. The most commonly visualized instrument seems to be a return to something like the Health Accords of 2003 and 2004, which identified a number of problem areas – most notably, wait times – where provinces pledged remedial actions and Ottawa committed to increasing cash transfers to be used at the discretion of provincial governments. Indeed, the Minister of Health, Jane Philpott, referred to a promised re-engagement in these terms.

But while the Accords did initiate significant flows of new money to the provinces and territories, they were not successful in spurring necessary health system reforms. They were not sufficiently specific to generate sustained efforts or sustainable change.

In fact, the extra money Ottawa provided probably did more to hinder health reform across the country than promote it. Rather than “buying change,” the extra money bought political peace and serenity (at least temporarily).

The Accords were weak because, to some extent, the provinces and territories have different needs and priorities. To reach consensus on a single agreement it was necessary to be vague and general in terms of what each province and territory would do by way of reform.

A better alternative going forward might be to more directly address particular regional concerns with a distinct contract between Ottawa and each province rather than a single accord.

We have only to look to the Paul Martin government’s arrangement for funding in two other areas as a model as to how this could work.

The first was the transfer of gas tax revenue to municipalities via the provinces for infrastructure investments. Ottawa signed one-to-one agreements with every province and territory. While the broad goals and structures were the same across all provinces, the individual contracts included variations that permitted some provinces to pursue regional goals within the national framework. A significant amount of much needed municipal infrastructure investment resulted from these agreements, and continues today.

The same general model was used by the Martin government to conclude childcare agreements with the provinces, but before they could be implemented the Harper government was elected and chose not to proceed.

This model of federal-provincial fiscal arrangements can more effectively promote health care renewal and should be considered by Minister Philpott going forward.

A set of pharmacare agreements might be concluded that would create nationally universal and portable coverage while recognizing that provinces are starting from different positions and may have different specific needs and administrative arrangements in mind. Other issues such as home care and long-term care facilities might be addressed at the same time or in a separate set of contracts.

The federal government would retain the capacity to represent national goals and interests, and the provincial governments would have flexibility to pursue their respective regional objectives within the national framework.

A stronger link between national objectives and each province’s priorities offers a better chance of sustainable health care reform.

Allan is a Troy Media Thought Leader. Why aren’t you?

Most of my research is in two areas. The first is the financing of health care in Canada, with a focus on the federal-provincial fiscal arrangements. The second general area is public budgeting. My colleagues Bruce Doern, Michael Prince and I have recently completed a manuscript on budgeting in times of crises which will shortly be published as a book. My teaching areas include health policy, microeconomics, public budgeting, benefit-cost analysis, and a course on the Canadian economy.