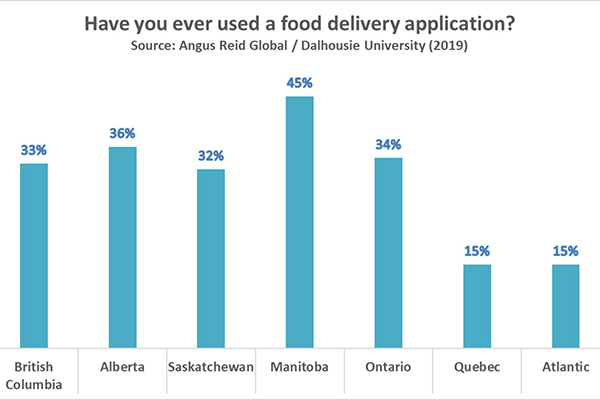 Food delivery apps are changing the Canadian restaurant landscape – and more changes are on the horizon, according to a recent survey.

The user rate for food delivery apps reached record levels in May.

A recent survey conducted by Angus Reid Global, in partnership with the Agri-Food Analytics Lab at Dalhousie University, suggests that 29 per cent of all Canadians have used a food delivery app at least once.

Data was collected across Canada from May 17 to 19; 1,500 Canadians were surveyed.

Findings suggest that food delivery apps are more popular west of Quebec than in Eastern Canada. Atlantic Canada and Quebec have the lowest use of the apps at 15 per cent.

Manitoba has the highest rate at 45 per cent, which can likely be explained by the popularity of SkipTheDishes. According to our recent survey, the Manitoba-based app is the most popular food delivery site in Canada, with a market share of 29 per cent. Uber Eats is second at 14 per cent.

Respondents earning more than $100,000 have the highest user rate at 33 per cent.

Unsurprisingly, the majority of users (52 per cent) are between the ages of 18 and 34.

SkipTheDishes has the highest satisfaction rate of all similar apps at 89 per cent, followed by Uber Eats at 86 per cent. Both scored high compared to other apps available to Canadians.

Most respondents praise the speed of delivery, the quality of the food and the options given for tipping the driver. Prices and packaging solutions also appear to be factors affecting the overall satisfaction rate.

Despite a high satisfaction rate of many leaders in the market, the intent to use delivery apps is slowly approaching its peak in some parts of Canada. A total of 31 per cent of Canadians intend to use a food delivery app within the next six months, which is two per cent more than the current user rate.

Food delivery apps have become very common in Canada over the last five years. They’ve benefited from a massive conversion from foot traffic to online purchasing of food.

Based on this survey, we expect Canadians to continue to use apps on a regular basis but don’t expect the market to expand further in a significant way in the short term.

As grocers and meal kit providers expand their e-commerce presence, we expect consumers to vary their purchasing habits.

Overall, food delivery apps appear to be here to stay.

But since the intent to use in the next six months is lower than the current user rate, according to the survey, the user rate likely won’t increase significantly over the next two years.

However, it’s possible the user rate will begin to increase again in 2022. More that 56 per cent of respondents willing to use a food delivery app over the next six months are between the ages of 18 and 34. That will drive demand for this kind of service and likely increase user rates across the country.

And finally, access to more options for a greater number of Canadians may increase the user rate, especially in rural regions of the country where the current user rate is eight per cent. 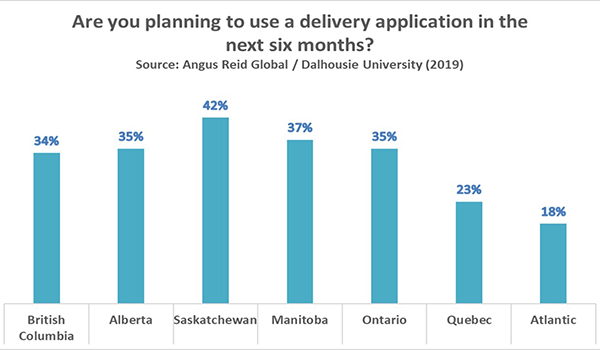