Come on, get happy: if a survey says we are, it must be true

Apparently, as you get older you get happier. Sclerotic, arthritic, calcified, deaf, blind, stupid and poor equals happy? Where do I sign up? 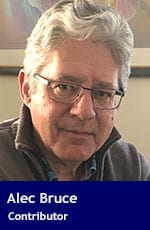 In a few years, people my age will get back pain, clogged arteries, brittle bones, hearing loss, cataracts, arthritis, heart disease, dementia and schizophrenia. What they won’t get, apparently, is unhappy about it.

Citing a recent national survey, Canadian Press reports that older people in this country are generally more buoyant than younger ones. In fact, and for no discernible reason, happiness scores actually “spike” after age 55.

Lifestyle or location doesn’t seem to matter. Creaky Tofinoites are just as overjoyed as rickety Torontonians to be alive.

“The online survey, conducted between June 11 and 17, found about half of respondents ranked their happiness at least eight out of 10, with almost no difference between rural and urban areas,” the CP story says.

Got money? That doesn’t matter much either.

“The factors participants deemed most influential on happiness were a sense of freedom and the belief they were living the life they had imagined for themselves, with 24 and 19 per cent of respondents identifying those as key,” the news service notes.

Of course, no one charts public opinion about aging more confidently than a well-educated, fully-funded baby boomer who’s been spoon-fed self-actualization mantras since he was a pouchling.

Go with the flow.

Just ask well-known American author, journalist and activist Jonathan Rauch – also 59 – who takes the point to its next step when he explains in one long piece for The Atlantic magazine how some research shows, “beyond a certain point, countries don’t get happier as they get richer.”

So sclerotic, arthritic, calcified, deaf, blind, stupid and poor equals happy? Where do I sign up?

These days, happiness is not merely a state of mind – it’s a business. And the point of all business is to sell you something. That’s what makes it happy.

When he was an editor at Forbes magazine some years ago, financial journalist Paul Maidment wrote: “A whole cadre of dismal scientists are blossoming midcareer into happiness economists. The World Database of Happiness, which is run out of Erasmus University in Rotterdam, Holland, counts 7,494 names in its Directory of Happiness Investigators.”

Some of those folks undoubtedly advised industries, governments and non-profit organizations on the fine art of engendering merriment in the workplace and among consumers. They spread the word and the word became gospel: Be happy or be a loser.

And be honest: Faced with a questionnaire, would you rather check the box that declares, “I’m deliriously grateful for all that life offers,” or the one that pouts, “I’m a desolate wretch without strength enough to carry on”?

As for me, I’m 58. I don’t do questionnaires to discover what I think or how I feel.

I’m happy when I remember the fir-wood hideaway I built with my bare hands when I was a kid, nestled deep in the north pasture of my family’s rural homestead.

I’m happy when I see my grandchildren wrestling the grumbling rollers that crash the shores of East Coast beaches in the summertime.

I’m happy when I watch someone actually sparing someone less fortunate a dime on the streets of old Halifax.

I’m happy when I witness anyone fighting inequity, restoring justice and defeating the casual cruelty that so often proscribes our daily lives.

One day, I might get any one of many ailments and infirmities. I might even get all of them. For that matter, I might run out of money and have to live in a cardboard box like literally millions of other people around the world.

In that event, I will fight to help others and myself.

I will strive to remember that happiness is not the absence of misery.

But it may very well be the absence of online surveys.