It’s time the Senate worked efficiently, for all Canadians

The health of our children is at stake. Bill S-228 should be brought to a vote in the upper chamber 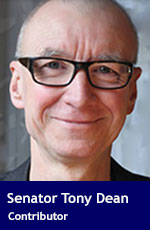 The Senate of Canada has several key roles and makes important contributions to the development of the country’s most pivotal public policy initiatives. But lately, several key government and private members’ bills have suffered the consequences of political theatre as we enter into the throes of an election year.

In recent months, we’ve seen a growing strategy by some of our more partisan colleagues to delay Senate approval of integral bills, presumably to ensure they die on the order paper when Parliament is dissolved later this year.

Some bills – notably government bills that make important changes to aspects of energy regulation and rules related to firearms – are facing delays in the chamber and in committee. In the absence of business planning and scheduled debate, it’s becoming increasingly challenging to make sure that important pieces of legislation get the fulsome study Canadians expect and deserve from us.

Other bills, some of which have already been through extensive debate and approvals on both sides of Parliament, are getting caught in the crosshairs of increasingly heated partisan rhetoric.

Bill S-228 is a perfect example of this.

Introduced in September 2016 by former Conservative Sen. Nancy Greene Raine, Bill S-228 aims to protect children by limiting marketing of food and beverage to our kids.

This bill is important because Canada is in the midst of a health crisis caused by consumption of foods and beverages high in sugar, salt and saturated fat. Our children are at special risk because so many have spent their lives eating highly processed foods and are vulnerable to certain types of advertising.

Children are bombarded from numerous sources with marketing for unhealthy foods. The legislation awaiting Senate approval would restrict such marketing to children 12 and under, though the government has specified that important community-level sports sponsorships, programs like Timbits hockey would not be affected.

Over the past two and a half years, Bill S-228 has been studied, debated and already approved by the Senate and the House of Commons. It’s been through two committee studies – one in the Commons and one in the Senate. As a former member of the Senate Standing Committee on Social Affairs, Science and Technology, I participated in the study of the bill.

After some important and substantial amendments, it’s back in the Senate needing one final approval. Its broad support should have at least ensured an expedient final vote – but unfortunately this has not been the case. Bill S-228 has now been back before the Senate for five months – and if the first two weeks of Senate sittings are any indication of what’s to come, there’s considerable concern it won’t proceed to a vote before the pre-election break.

If Canada’s Senate is to be recognized as a modern and important part of our legislative process, it must work efficiently. This means devoting time to providing constructive improvements to important legislation while passing promptly those bills that have already gone through due process, such as Bill S-228. This is good business planning and our children and our families are counting on it.

And we know, business planning and scheduling debates work. Bill C-14, dealing with medical assistance in dying,challenged the Senate’s usual approach to debate and benefited from thoughtful planning. Before my appointment, I followed those debates in the Senate closely with millions of other Canadians. It was an historic and highly successful project that saw senators working together to ensure that the best interests of Canadians were protected.

Last year, I advocated for a similar process for debates on Bill C-45, which proposed to strictly legalize and regulate cannabis. Leaders agreed on dates and times and, as such, debates were sensibly organized by themes and provided senators ample opportunity to speak. It did not limit the number of amendments – instead, amendments were clustered by subject matter. It was transparent, accessible and meaningful for Canadians.

As May and June approach, the Senate should again consider this modern approach to the legislative process before we enter our next federal election. At the very least, senators should agree on organizing dates and times for votes on legislation that has already been sufficiently reviewed and approved – important, non-partisan and meaningful bills that could significantly improve public health for Canadians – such as Bill S-228.

Sen. Tony Dean is a member of the Independent Senators Group and was named to the upper chamber in November 2016. Prior to his appointment, Sen. Dean was a distinguished and non-partisan senior public servant in Ontario, serving as a deputy minister and, from 2002-08, as secretary of the cabinet and head of the Ontario public service. He is also a Distinguished Senior Fellow at the School of Public Policy and Governance at the University of Toronto.

It’s time the Senate worked efficiently, for all Canadians added by Tony Dean on March 21, 2019
View all posts by Tony Dean →

Tony Dean was appointed to the Senate of Canada on November 10th, 2016. Prior to his appointment, Senator Dean was a professor at the School of Public Policy and Governance at the University of Toronto and continues his association with the School as a Distinguished Senior Fellow. He has advised governments and international organizations on public service reform and building capacity for policy-making and delivery.