Canada is nowhere near to facing its climate deficit 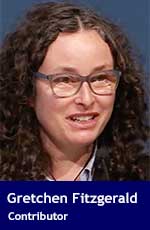 After approving the Bay du Nord offshore oil project off Newfoundland and Labrador in April, the Canadian government has decided to take our climate risk-taking to a whole new level by issuing a Call for Bids for oil exploration for an area one third larger than the size of New Brunswick. Bids to drill for oil in these regions are due by November 2nd.

At that point, Canada will have experienced another year of forest fires, droughts, storms, and floods. Just this past week, a storm ripped through parts of Ontario and Quebec, leaving at least 10 people dead and hundreds of thousands without power for days. The heatwaves last summer in British Columbia killed over 500 people, many of them from vulnerable populations, such as the elderly or disabled. All of this is driven by increased greenhouse gas emissions, emissions we must begin to see decline immediately if we want to prevent future deaths and costly disasters.

Unfortunately, we are nowhere near facing our climate deficit. The federal-provincial dysfunction when it comes to resolute climate action is on full display with this call for new oil and gas exploration. The Call for Bids was issued by the offshore oil board, a federal-provincially appointed body which has a dual mandate to promote offshore oil and gas and protect the environment and safety. Once oil-rich, Newfoundland and Labrador government has recklessly bankrupted itself over the Muskrat Falls mega hydro project. The royalties from decades of oil drilling have been squandered instead of being set aside to deal with uncertain times.

There is no economic future for oil and gas in Newfoundland and Labrador, and misleading people by downplaying the need to rapidly transition to a green economy in the province is reckless. The federal Minister of Environment and Climate Change has declared Bay du Nord may be the last oil project the federal government approves. The international community has called approving new fossil fuel projects “moral and economic madness.”

On May 12th, the day after Canada’s reckless call for bids, Fatih Birol, executive director of the International Energy Agency and the world’s top energy economist, declared that no new oil projects should go ahead, adding that new projects are not needed and are immoral. “I believe, “he said,” we have the chance to make this a historic turning point to a cleaner and more secure energy system … This is the first time I have seen such momentum behind the change to clean energy. The world does not need to choose between solving the energy crisis and climate crisis; we can do both.”

The dysfunctional approach to the climate emergency Canada is taking in approving new oil projects means that we are committing to GHG emission reductions that will push us well beyond our climate targets. Just this past week, new research shows we would need to start shutting down existing oil projects to meet a 1.5 degree C target. Why are we continuing on this dangerous path when the outcome is so clear?

The last federal budget provided $2.5 billion in tax dollar subsidies to the oil industry to reduce its GHG emissions using speculative carbon capture and storage. In 2020 the sector received $18 billion in federal subsidies. Add to this the cost of dealing with climate disasters – such as the $9 billion cost of flooding in B.C. last year. With a track record of meeting with the oil industry lobby five times per business day, federal government officials have clearly lost their ability to balance its climate deficit: we are literally cooking the books when we approve and subsidize fossil fuel projects on the one hand and then spend climate disaster relief on the other.

Renewables, energy efficiency, and storage are now cheaper than fossil fuels and will prevent further climate disasters instead of making them worse. Distributed renewable energy is more resilient to the coming climate impacts (the ones we can’t avert) and will create opportunities, particularly in rural areas across the country.

It’s time to kick this habit. It’s time to break the cycle of approving oil and gas projects and then responding to the victims of climate change disasters. New oil and gas and wasteful oil and gas subsidies are costing us. As people clean up downed trees and restore safe power once again, another clean-up needs to happen. In this case, we need to clean up our act on climate change and stop making the climate deficit worse for everyone.

Gretchen Fitzgerald is the National Programs Director for the Sierra Club Canada Foundation.

With an academic background in marine biology, Gretchen Fitzgerald became Atlantic chapter director of the Sierra Club Canada Foundation in 2007 and transitioned to national programs director in 2016. She led the campaign to stop oil and gas development in the Gulf of St. Lawrence and secured provincial commitments to ban uranium mining in Nova Scotia.