Why is change so slow? 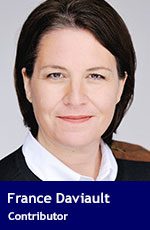 Why on Earth has Canada not been able to change the number of women entering and progressing in skilled trades careers or associated apprenticeship programs?

We’ve been talking about this subject for too long. For many women who trailblazed and pushed their way into skilled trades jobs over the last decades, it must feel exhausting.

A recent review by the Canadian Apprenticeship Forum (CAF-FCA), based on the latest apprenticeship data available from Statistics Canada, shows that in 2018 women made up 4.5 per cent of total female apprenticeship registrations in construction, manufacturing and transportation trades, a 0.6 per cent increase from 2014.

In addition, the barriers women face in entering and staying in these careers have been shared widely at events, on numerous websites, in government Hansard transcripts and covered by national and regional media.

Why is change so slow?

A national task force comprised of members from across the apprenticeship and skilled trades community identified strategic priorities based on the feedback from the events and developed the strategy.

Because the national strategy is industry-led.

What makes it so different from anything else out there?

It sets a national target for women’s representation and holds industry accountable for their training numbers. If in Canada the goal is to recruit more women to the skilled trades and retain them, then we must agree that numbers matter.

We must also face the reality that, so far, leaving employers, organizations and governments to their own devices has created opportunity for some to provide excuses rather than a commitment to making change.

There are no women applying for these jobs is one explanation that’s often raised as a reason why numerical targets can’t work. Chicken or egg?

Perhaps if industry focused on developing bias-free human resources policies, providing respectful workplace training to employees and management, and implementing a zero-tolerance approach to workplace harassment and discrimination, more women would be inclined to apply. Additionally, parents may even encourage their children to explore these careers.

The CAF-FCA national strategy doesn’t provide a recruitment strategy for the promotion of the skilled trades as viable careers or apprenticeship as an equitable educational pathway.

It focuses on preparing the house for the dinner party, not on inviting the guests – at least not yet. It provides industry and other stakeholders with the tools to address well-known barriers for women in the skilled trades by sharing best practices and resources in one place, at SWiTCanada.ca.

The strategy also celebrates tangible commitments made by employers who take the CHAMPIONS4CHANGE pledge to hire and train more women in their organizations. Together, those champions will change the collective number and lead by example.

The hope is that this movement, supported by this national strategy, will lead to inclusive and respectful workplaces, period.

Using the SWiT platform to highlight tools that address systemic barriers to inclusion, doors should open for others who want rewarding careers in the skilled trades but don’t currently see it as a safe place.

France Daviault is the executive director of the Canadian Apprenticeship Forum, a passionate communicator and advocate for equity workplaces and communities.

France is a Troy Media contributor. Why aren’t you?

France Daviault is the Executive Director of the Canadian Apprenticeship Forum, a passionate communicator and advocate for equity workplaces and communities.