Is the golden age of show and shines coming to an end?

It’s almost a cultural cliché these days. The old cars roll in and park, their drivers set up folding chairs or start polishing, the hot dog and hamburger vendors start cooking, someone puts on some Chuck Berry or Bill Haley, and the people file in to gaze at vintage and classic automobiles.

The routine is repeated hundreds of times throughout the summer across Canada and the U.S.

As a way to raise money, draw attention to your cause, or just relax and reminisce, vintage car show and shines take some beating. The causes are endless: fighting cancer, raising money for hospital auxiliaries, providing funds for homeless, supporting animal shelters, you name it.

If you like old cars, you get to ogle them to your heart’s content while doing some good.

In fact, we seem to be in the midst of a golden age for show and shines in Canada and the U.S.

Maybe it’s baby boomers trying to recapture their misspent youth, or a kind of last hurrah and the realization that the internal combustion-engined automobile may be on the way out. But show and shines seem to be everywhere and they cater to every conceivable taste in automobiles.

For example, at the annual All British Field Meet (ABFM) in Vancouver, almost 100,000 people show up every year to check out the vintage English iron. 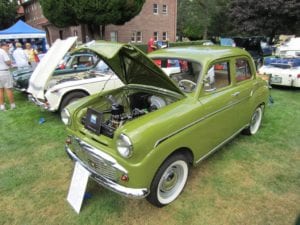 And organizers of one of the biggest cruise-in events in North America, the Woodward Dream Cruise in Detroit each August, expect at least a million and a half people to show up. Some 50,000 classic and custom cars from around the world are on display.

But there’s a fly in the ointment. The people who attend these events – and those who bring the cars – are getting older. At the ABFM, there weren’t many adults under 50 on the grounds. It was grey heads everywhere you looked.

“There aren’t as many young people as there used to be,” he told me. “These days, there are probably more computer geeks than car buffs. I wouldn’t say that this is the last gasp for vintage car shows, but the people are getting older.”

Although vastly different in size and scope, the Fleetwood and ABFM events are fairly typical: if you locate your show in a garden or park, you stand a much better chance of attracting women as well as men. If you just stick a bunch of hot rods in a parking lot, you’ll get the hard-core enthusiasts but not much else.

Plunkett took his show even further, bringing in musical acts such as Paul Revere and the Raiders, The Beach Boys, Fabian and so on.

He has had at least 33 charities at his Fleetwood show and, in an effort to attract the younger crowd, he’s always featured a “take a kid to the car show” promotion. “We are doing a real push for this,” he said. “I want this event to be more than just another car show.”

Alas, the 2019 version earlier this month marks the end for this event.

Throwing another monkey wrench into the mix is the fact that today’s car enthusiast tends to be more interested in fancy wheels and high-powered stereos than high-boy Model Ts or ’55 Chevy Nomads – if he’s interested in cars at all.

Generation Y, for example, is notoriously indifferent to automobiles – many still use skateboards or bicycles as their main form of transportation. And let’s face it, those don’t really show that well.

All these beautiful cars on display across the country?

In another 10 or 15 years, there’s going to be some real bargains out there, because younger people just don’t care about them and the people who own them now will have gone to that big show and shine in the sky.

So break out the Turtle wax, put on the Chubby Checker and enjoy them while you can.