Survival of the fittest, from a very young age 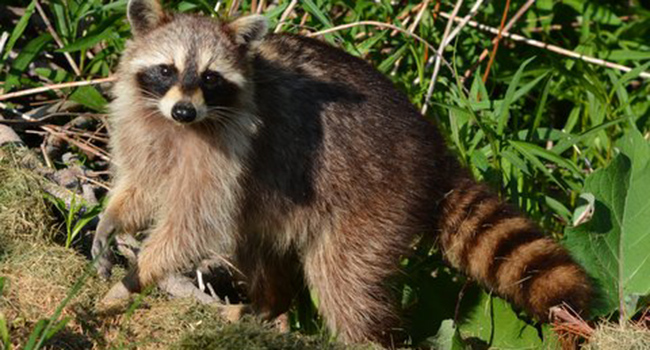 I was working on a breeding bird survey recently and encountered a scene that was both moving and shocking. Huddled in the short grass on the shoulder of the road was a baby raccoon, only days old, snuggled up beside its mother.

At first I thought the scene was a Disney moment – one of a mother and daughter sleeping peacefully, albeit in a rather dangerous place as cars whizzed by.

However, I soon realized the mother was dead, killed by a car. All the usual emotions ensued. “Isn’t that cute” turned to dismay for the fate of the baby, then to wondering how to help.

As a biologist, I know I must not interfere. So I simply observed and hoped the baby would realize the jeopardy it was in and move to a safer place where it could find food and shelter.

As my bird survey progressed, I couldn’t keep the endangered baby out of my mind, so I eventually went back to see if it was still there. To my surprise it was, even though more than two hours had passed and hundreds of cars had driven by inches away. More shockingly, I now saw that the baby was trying to suckle from its dead mother. This pathetic, heart-wrenching action moved me deeply.

Was it really suckling or was something else happening?

Baby animals are routinely abandoned by their parents – usually because the parent is driven away or killed, or sometimes because the female is too young or incapable of caring for the offspring.

It sounds heartless, but the primary purpose of animals is to breed and propagate the species. So if you had an animal of breeding age and a baby, and you had to choose which one would live, which would you choose?

The adult always wins and, since breeding is paramount, the baby loses.

Some orphaned babies are unlikely to survive if very young but others can fend for themselves at an early age.

Precocial babies, such as rabbits, can almost immediately care for themselves and only need a few hours of instruction on what to eat and where to hide to survive.

Others, such as dogs, cats and people, are altricial and require care and training for weeks, months or years before they’re fully independent.

The raccoon falls into the latter category, being born helpless and with eyes closed. But it develops rapidly from dependence to being able to fend for itself. How it learns so rapidly is unknown but why it does is assuredly clear. The faster an animal can take care of itself, the more likely it will be to survive.

Raccoons are known to be resourceful, adaptive and smart, so it’s not surprising they’ve figured out the survival thing. Charles Darwin studied behaviour and speciation more than 150 years ago, and developed his well-known and profound Origin of the Species. The survival of the fittest means only the strong and most adaptive survive when things get tough.

The baby raccoon continued to try to suckle, I thought, as I approached. Its dreamy, sad eyes looked up at me, and then it bowed its head and tore a piece of flesh out of its mother’s stomach and ate it!

It wasn’t suckling – it was eating its own mother.

The biologist in me took over again and my shock turned to awe as I watched this tiny baby striving to survive under the harshest of conditions. It understood the foundation of survival: eat or be eaten.

Hours later, I revisited the site and saw that a substantial meal had been taken and the baby was gone.

I searched to make sure it wasn’t another roadkill victim and luckily didn’t find it. Somewhere in the fields and woods nearby, a baby raccoon had grown up in hours rather than weeks.

I knew this little critter would make it since it truly understood how to survive when the odds were stacked against it. 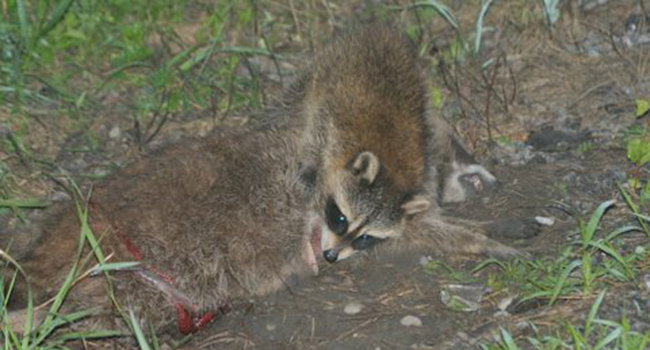 Geoff Carpentier is a published author, expedition guide and environmental consultant. Visit Geoff online at www.avocetnatureservices.com,  on LinkedIn and on Facebook.