By Harvey Chochinov on April 7, 2016Comments Off on Advanced directives for assisted-dying a dangerous step 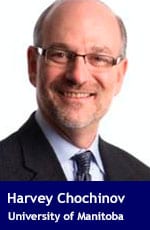 The moment we are born, our lives take flight; and the longer we are airborne, the greater the chance of encountering turbulence along the way. While every flight is destined to land, some landings are harder to contemplate than others.

The parliamentary committee tasked with advising the federal government on how to roll out physician-hastened death must have struggled with the prospect of dying with dementia. Their advice to lawmakers was anyone with a condition likely to cause a loss of competence should be able to complete an advance directive any time after their diagnosis, directing that they should be euthanized.

This recommendation goes well beyond anything the Supreme Court of Canada – which stipulated physician-hastened death must only be considered for competent adults, in the circumstances of their current condition – intended. The idea that Canada would make it lawful for people to consider a future version of themselves unacceptable and sign off on an order to have their lives ended was not something the court contemplated.

After all, in any assisted-dying regime, a competent patient is free to change their mind or express their ambivalence by withdrawing a request or postponing an assisted death. To permit an assisted death to proceed on the basis of an advance directive effectively denies this protection to persons who are no longer capable of making or expressing health-care decisions.

That is a risky proposition.

Research shows people are not very good at predicting what they would want and what they might need and feel in circumstances they have not yet confronted. The farther removed those circumstances are from today’s reality, the more difficult it is to imagine the response.

So why did the Canadian committee go as far as it did?

Fear is seldom a reliable guide to good social policy. But like most of us parliamentary committee members must have found the prospect of turning into an altered version of their former selves terrifying. They likely did not appreciate that dementia is a progressive terminal illness; the seventh-leading cause of death in Canada. They probably did not appreciate the suffering they imagined was due to lack of adequate or appropriate end-of-life care these patients receive – despite ample evidence that the symptom burden can be comparable to cancer.

Patients with dementia are less likely to be referred for palliative care, have family caregiver involvement in decision-making or receive palliative medication, including pain medication.

Dutch legislators included a euthanasia advance-directive provision for patients anticipating a cognitive decline. While their rationale likely mirrored the Canadian parliamentary committee, the idea has turned out to be completely untenable. Despite requests occasionally being made, they are rarely adhered to.

In the vast majority of instances, physicians find it “inconceivable” to comply with the requests, given the patient with dementia has become a psychologically different person than the one who made the original request; physicians are no longer able to determine the patient’s current wishes, feel the patient is not suffering or believe that they no longer want to die. While family members were supportive of not including life-prolonging treatment, they asked that the euthanasia advance directive not be followed because of uncertainty about the person’s current wishes, not being ready for the person to die or not sensing that the person is suffering.

As for planning a good death with dementia, end-of-life discussions need to start sooner rather than later. Patients must have the opportunity to express their wishes and preferences for care. Their pain and symptoms need to be well-managed. Advanced-care planning can ensure unwanted treatments – which may prolong the length of life without sustaining or improving the quality of life – are not imposed. Such planning can also reduce the likelihood of unnecessary hospitalizations and increase the chances of dying where people choose.

There is good data to demonstrate that compassion, a gentle touch, respect, and patience can benefit even those patients with moderate to severe dementia. Granted, this approach is not the quick and efficient landing the parliamentary committee members may have had in mind. But for now, it is the very best we can do.

Dr. Harvey Max Chochinov is a distinguished professor of psychiatry at the University of Manitoba. He holds the only Canada research chair in palliative care. He led an external panel, appointed by the federal government, looking at legislative options to Carter v. Canada. He is an advisor to the Vulnerable Persons Standard.