One step at a time: a simple solution to a better life

Create visions and not resolutions to take control of your life

It may be that the goals we set are either too abstract or unrealistic.

So maybe it’s time to take a different approach to self-improvement.

Management gurus will tell you that a goal, to be achievable, must be SMART: specific, measurable, achievable, realistic and timely.

I was reminded of the SMART goals concept at a recent Toastmasters meeting. The speaker used his experience preparing for and running a marathon to explain how it works. But with all due respect to the speaker, I wonder how many in the audience that day will actually implement his recommendations once reality – the kids, the dog, aging parents, work – intrudes.

But there is another way to approach this problem. And for me, at least, it’s working.

I was feeling crummy: out of shape and always tired. I wanted to feel good.

That wouldn’t pass the test of an achievable goal from the SMART people. Besides, sometimes a goal is just too terminal, an achievement with an end point rather than a lifestyle change.

I envisioned myself feeling good, motivated and energetic. I thought about what that would look like and what could take me there.

Walking seemed like a good first step. It makes me feel good and it’s exercise, so I needed to set a walking standard. To start, it was 8,000 steps, the default setting on the Orbit fitness tracker I’d been wearing for a couple of years.

At first it was a struggle physically but over time, it became a little easier. I quickly discovered that beyond great exercise, walking gave me time to think. It’s also a great opportunity to practise my speeches and listen to podcasts. And I started having regular walking meetings with friends and colleagues before stopping for coffee.

I told everyone what I was doing. Some were amazed that anything could get me out from behind the keyboard but most have been actually quite encouraging. Sometimes the first thing people say to me now is: “Hi Greg, how many steps have you done today?”

Of course, some days are tough. But I just keep envisioning the prize – smiling and feeling good. I’m not giving up, whether it’s late at night, a cold winter day, I’m on holiday or sick as a dog.

A couple of months ago, I discovered the phrase “Imagination is realization,” from Dr. JoAnn Dahlkoetter, a marathon winner,  keynote speaker and leading sports psychologist. She’s also the author of the best-selling book Your Performing Edge: The Total Mind-body Program for Excellence in Sports, Business and Life. 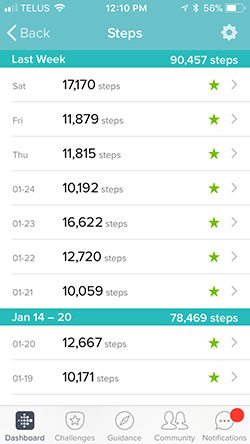 Here’s the basic idea: When you feel you just can’t make it, take yourself back to a time when you were successful, visualize what happened, what you did to achieve your success or overcome that obstacle. This will give you the energy to persevere.

So now when I falter, I follow Dahlkoetter’s advice.

I rewarded myself by trading in my aging Orbit for a new FitBit Charge 2.

An old Chinese proverb says the best time to plant a tree was 20 years ago; the second best time is now.

I may have planted the tree at the second best time, but I’ve discovered a few valuable things. To have success, you need to take leadership of your life. You need to create a vision of what success will look like rather than make resolutions.

And you don’t have to wait until New Year’s Eve. You have 364 other days to choose from.