By Jerry Buckland on September 18, 2016Comments Off on Rein in payday lending to start tackling poverty 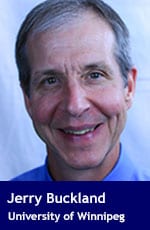 I met Ben and Sherry when I was facilitating a focus group discussion in Winnipeg with consumers who use payday loans. Their stories help illustrate a serious national problem.

A payday loan is for a small amount (up to $1,500) that must be repaid quickly and carries a hefty fee. Payday lenders often have small storefronts in urban centres, frequently in economically depressed neighbourhoods, and advertise ‘fast cash’ or ‘cash advance.’ Some offer their services over the Internet.

Payday loans are expensive and their actual interest rate is often difficult to discern.

Even where payday loans fees are capped by government regulations (in all provinces except Newfoundland and Labrador, and Quebec), the rates are still alarmingly high. If you borrow $100, for example, the payday lenders can charge a $15 to $21 fee (the general range across the country).

This sounds like the 15 to 20 per cent interest rates of most major credit cards. But take a closer look.

For some borrowers, this is where the trouble begins.

Such rates are dramatically higher than interest on mainstream bank credit products. So who would bother to use them and why?

At the focus group, Ben told me he regularly took out two or three payday loans a year to cover unforeseen expenses. Ben could be the poster child for the payday loan industry, since he uses the loans in the way the industry claims they’re designed – as a convenient short-term bridge between pay cycles. But, sadly, Ben’s experience is not the norm.

I also met Sherry. She has relied on payday loans for years and found herself in a debt trap. She claimed her personal record was using 10 payday lenders at a time. She borrowed from one to pay off the loan with another. When she could no longer get payday loans, her spouse did.

Sherry’s financial needs were not met through payday loans, just made worse by them. She and her family were caught in a long-term cycle of debt from which they could not escape.

Sherry needed a change in practice (more income and/or less spending) and a longer-term credit product with minimal rates that could be repaid in instalments and help build her credit record.

A Pew Charitable Trust study argues that repeat borrowing among U.S. payday loan clients is the norm. Another study found that one-fifth of California borrowers take out 15 or more loans in an 18-month period.

Research I was involved with examined Canadian consumer experiences with payday loans and found repeat borrowing is also a problem in Canada. Data from British Columbia shows that the average number of loans per payday borrower in 2014 was 4.3. And the number of people taking out 15 loans or more had increased by one-third. In Nova Scotia, in one year, 40 per cent of loans were from repeat borrowers and 22.3 per cent of borrowers took out eight or more loans.

Groups working to reduce poverty in Canada have been sounding the alarm on payday lending for years. So what can be done?

When the federal government of Prime Minister Justin Trudeau took office almost a year ago, it expressed a commitment to create a Canadian poverty reduction strategy. Revisiting the regulations surrounding payday loans should be on the agenda.

It is time for the federal government and big banks to step into the breach that payday lenders have filled. Consider the example set by Vancity Credit Union with its Fair and Fast Loan. The loan is available to its B.C. members, has flexible terms (from two to 24 months for borrowing up to $2,500), with an annual interest charge of 19 per cent, not 639 per cent.

The Financial Consumer Agency of Canada recently undertook a study of payday lending patterns and will report soon. What it finds could give the federal government the basis to make good on its promise to tackle poverty – and begin the necessary work of more stringently regulating this contentious industry.

Jerry Buckland is a professor of International Development Studies at the University of Winnipeg. He is author of Hard Choices: Financial Exclusion, Fringe Banks and Poverty in Urban Canada.

Jerry is a Troy Media Thought Leader. Why aren’t you?

erry Buckland is Professor, International Development Studies, and has been an academic for 25 years. Before that Jerry worked for a development organization in Bangladesh for five years. His teaching and research focus is on micro-finance/bank access, community/economic development, rural development/food security, and development in Bangladesh.

Buckland was Visiting Fellow, the College of Business, RMIT University, Melbourne, Australia in 2016. He was MSC Dean from 2013 to 2015 and previously coordinated the International Dev’t Studies program for over 10 years. Buckland was the Director of the University of Winnipeg’s Master’s in Development Practice program in 2012-3, and a Visiting Fellow at the Bangladesh Institute of Development Studies in 1992. He worked as an agricultural economist for Mennonite Central Committee in Bangladesh in the late 1980s-early 1990s.