Hybrid warfare is a threat to our way of life 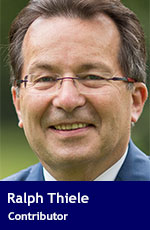 Hybrid warfare has become a familiar phenomenon. But at a time of climate catastrophes and pandemics, booming technological innovation, geopolitical rivalry and a global reorganization of supply chains, hybrid scenarios below the threshold of war have gained enormous importance.

While hybrid threats used to be the weapon of the weak, new technologies and their disruptive potential have made such attacks an effective, hitherto low-risk instrument of power – one that will foreseeably evolve into the gold standard in geopolitical confrontation.

Nobody has described hybrid warfare as aptly as General Valery Gerasimov, the Russian Chief of Defense Staff, who has called it “a clever combination of economic, secret service and many other non-military and military means [that] can transform a flourishing country into a chaotic torso in a short period of time.”

As we have learned from Russia’s recent campaigns on NATO’s Eastern flank, hybrid aggressors employ their capabilities in pursuit of hybrid objectives both in and beyond traditional domains (i.e., air, land and sea) and new domains (i.e., space, cyber and the electromagnetic spectrum). The Kremlin aims at people, assets, critical infrastructure and, last but not least, the self-image and cohesion of entire states and societies.

New technologies such as 5G, artificial intelligence (AI), autonomous systems, cyber, quantum and space have had a catalytic effect on hybrid warfare. They improve the starting conditions for hybrid action, expand the arsenal of hybrid actors and thus help to increase the scope of their activities as well as their chances of success. New technologies offer offensive opportunities in particular.

Here are a few examples:

In a malicious hybrid approach, Russia has targeted liberal democratic constitutional states through Belarus via an aggressive, artificially generated migration flow across the Polish and Lithuanian borders. The fierce disputes of the great migration crisis of 2015 are to be reanimated in a targeted manner, and the European Union’s political stability is to be shaken. It can be seen how – fuelled by social media – the seeds are growing and the people who pull the cords in this campaign are being forgotten in the public eye. This approach also includes supporting radical political groups and fuelling unrest.

Hybrid threats fuse industrial age techniques with cyber operations. They use a system of selected visible and clandestine actions, including social engineering, in which the attackers are almost invisible and the target is well-defined. The number and quality of Russian cyber-attacks have grown enormously. One cybersecurity alarm follows the next. The networks and servers of manufacturers, professional and private users, which are in particular danger by Russian attacks, are only the tip of the iceberg. Spy software in national parliaments and security authorities, in critical infrastructures and weapon systems, give Russia enormous opportunities in economic and political disputes. State, state-sponsored and criminal perpetrators cavort in our networks. They explore, steal, falsify, coerce, and blackmail as they look for access to research, industrial and state secrets, databases and private accounts.

The use of online services such as social media, messenger services or cryptocurrencies are an integral part of Russian hybrid campaigns and are also used to finance activists. The focus is on the misuse of Internet platforms for communication purposes, the dissemination of propaganda, recruitment and knowledge transfer. Social networks and media can be manipulated for hybrid purposes – from voting behaviour to terrorist mobilization. The instruments Russia uses include state-controlled media at home and abroad. Social media, in particular, are susceptible to fake news, meant to undermine the trust of Western societies in their own institutions and political elites. Migration and the ongoing COVID-19 pandemic offer ample opportunities for such fake news. Indicators of malign activity can be found across the board, including microtargeting, deep fakes, and technology-sharing between hybrid actors.

In hybrid warfare, intelligence services are in demand like never before. To respond to hybrid threats, we need deep, broad and comprehensive analyses over extended timescales and across actors, regions and issues. Technologies such as Big Data and AI have enormous potential to enable a new depth in identifying, tracking and countering hybrid threats. At the same time, these very technologies enable new hybrid challenges from technologically advanced opponents.

Multi-domain operations effectively require a feedback loop between political objectives and operations. Intelligence permanently feeds this loop, ensuring decision-makers and operators have the information they need to adjust nimbly. Virtually every form of technical intelligence profits from new technologies, including the emerging fields of cyber and social media intelligence, to name a few. Moscow uses its secret services virtually in cyberspace, including through the support of hacker networks, but also increasingly again in real space: political murder has returned as a form of Russian action.

Armed forces have become another part of the hybrid portfolio. Military strength provides additional opportunities to exploit hybrid methods, even without the active use of force. Moscow’s aggressive military measures and provocations on land, air and sea, and in space and cyberspace have reached alarming proportions, involving military manoeuvres, simulated attacks and large-scale lightning exercises near its neighbours’ borders, among other actions. The combination of new technologies and attendant operational concepts have been the key to the successful rise of Russian military capabilities over the past decade.

Multi-domain operations in hybrid campaigns involve outmanoeuvring an opponent, in which the opponent’s cohesion is disrupted. This involves skilfully challenging the opponent simultaneously with an unsolvable variety of problems in different domains, thereby overburdening and finally outmanoeuvring him.

At present, Russia is the grandmaster of hybrid warfare, though China is establishing itself as the coming world champion, and there are a number of other rising actors. To prevent, defend against and – if necessary – counter and outmanoeuvre hybrid opponents, it is therefore important for political, civilian and military decision-makers, as well as for industry and academia, to develop a common and comprehensive understanding of the implications of new technologies in a hybrid threats/warfare context.

NATO, the EU and member nations should develop robust multi-domain instruments for achieving advantage in hybrid campaigns while preventing escalation into larger armed conflict. Outmanoeuvring opponents requires the backbone of resilient infrastructure that can withstand attacks from cyberspace, outer space, and the electromagnetic spectrum.

Ralph Thiele, retired Colonel, is President of EuroDefense (Germany), Chairman of the Berlin-based Political-Military Society, and Managing Director at StratByrd Consulting. In his 40-year military career in the German Armed Forces, he has held key national and international positions. He also offers advice in his honorary and business functions on defence innovation in times of digital transformation. He has most recently published the book “Hybrid Warfare. Future and Technologies.”