What we get wrong about the Islamic empire and crusader armies

Author Steve Tibble’s message is that much of the crusader narrative is simplistic caricature. But it can’t erase facts

As imperial enterprises went, it was a stunning performance. Coming from apparently nowhere, an extensive Islamic empire was born in the century following the Prophet Muhammad’s 632 death.

Arab armies swept out of the remote Arabian peninsula to conquer the Middle East and North Africa, subsequently crossing the straits of Gibraltar to Spain and establishing the Muslim kingdom of Al-Andalus. From there, it was on to France before being turned back by Charles Martel at the Battle of Tours in 732.

Along the way, Arab armies won remarkable battlefield victories, including the destruction of a much larger Byzantine force in 636. Jerusalem, hitherto the sacred city of Christians and Jews, fell in 637-638.

Historian Thomas Madden takes the view that the medieval crusades are best understood as a belated European Christian response. Beginning in 1096, the aim was to recover the Holy Land, especially Jerusalem.

Jerusalem was retaken in 1099, giving rise to what’s been called the Latin Kingdom of Jerusalem. At its zenith, it included what’s now Israel, the West Bank and some contiguous areas. And there were three other crusader states in the general vicinity: the County of Edessa, the Principality of Antioch and the County of Tripoli.

However, geography and demography ultimately doomed them. Surrounded by an ocean of Islamic power, they couldn’t sustain their position.

Crusaders tend to get a bad press now, a good deal of which is undoubtedly deserved. But there are important respects in which historical reality is more complicated than the dominant narrative allows.

Madden, for instance, takes issue with the characterization of crusader knights as impecunious second and third sons who, bereft of inheritances, had nothing to lose.

On the contrary, many were lords, even kings. Think of the Third Crusade with Richard the Lionheart and Philip II of France. Crusading could be a very expensive business. Sometimes it was even necessary to liquidate assets in preparation.

For us, the thought of religiously motivated warfare is virtually incomprehensible. But medieval men and women would’ve been equally baffled by the modern idea of going to war for something like democracy. 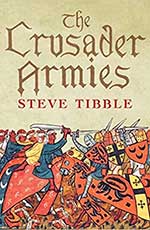 Steve Tibble makes the same point in his recent book The Crusader Armies. While we’re habituated to accept the nation state as a given, that construct is – in historical terms – a relatively recent invention. Previously, “Religion, rather than ethnicity, was the key cultural marker.”

Drawing on research published over the past two decades, Tibble argues that our assumptions about crusading warfare are fundamentally wrong. It wasn’t simply a matter of newly arrived European forces battling local Muslim armies. Far from it.

Instead, the European arrivals – generally described as the Franks – had local allies. Tibble argues that Christians were still in the majority across most of the territories that comprised the crusader states.

Yes, Muslims had conquered much of the Middle East. But the region still had substantial indigenous Christian populations.

There were Greek Orthodox, Syrian Orthodox, Armenians and Maronites. Tibble notes the Armenians as particularly valuable allies, participating “at all levels in the military of the crusader states, from mercenaries and infantry, through to knights and lords.”

And because many of the European crusaders returned home, it was only by drawing support from these indigenous groups that the crusader states were able to last nearly two centuries.


To pull it off, the remaining crusaders had to make some attitudinal adjustments.

Aspects of Middle Eastern Christianity that would’ve been considered deeply problematic back home were glossed over. To quote: “You could afford to take a hard line on heresy if you lived in western Europe. If you lived in Palestine or Syria, you needed all the help you could get.”

There was also the sexual dimension, driven by the shortage of crusader women and the established tactic of building alliances through marriage.

Marital intermingling with indigenous Christians thus began early and was sufficiently prevalent that many of the established crusader families became a mixed-race blend. To them, “Europe was just a faraway land … part of a childhood story.”

Tibble’s message is that much of the conventional crusader narrative is simplistic to the point of caricature. And that’s not a socially desirable thing.

What we get wrong about the Islamic empire and crusader armies added by Pat Murphy on June 20, 2021
View all posts by Pat Murphy →