Sociologist reflects on living in the time of the pandemic

It would hardly have been a stretch for Amy Kaler to write a cogent social analysis of the COVID-19 pandemic.

As a sociologist, Kaler has a background in population health and the sociology of infectious diseases. As the pandemic advanced relentlessly in the early days of 2020, she received enough requests for media commentary that friends started calling her the “plague whisperer.”

But as COVID-19 began changing our lives, social analysis isn’t what called Kaler’s name. She wanted to write something different – more personal, direct and accessible to a broader audience, more reflective of her experiences of “being-in-the-world, with an emphasis on cognitive warps and distortions,” she says.

“I started to notice that I myself was changing,” she said. “My sense of time and space was changing [during the height of the pandemic] and I thought I should try to understand what these changes are.”

The result, released this fall by University of Alberta Press, is Until Further Notice, a collection of short personal reflections written in real-time during the first year of the pandemic.

Kaler grounds her writing in a concept borrowed from American cultural theorist Sianne Ngai, called “stuplimity,” or “the mix of shock and overwhelm with boredom and aimlessness that closes off access to full expression of the grand emotions,” writes Kaler, “like sorrow or anger, and leaves you marooned in the shallow waters of irritation, fretfulness, and anxiety.” 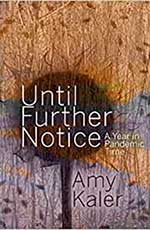 Until Further Notice abounds in raw and honest confessions of that “irritation, fretfulness and anxiety” simmering just below the surface.

Her narrative opens at an academic conference in Ottawa in mid-March 2020. Until then, the coronavirus threat had seemed somewhat distant and abstract to her, but it was suddenly starting to feel uncomfortably close to home.

“News of the virus seeped into the conference rooms, getting worse and worse. Furtive checking of phones during sessions increased.”

A final day off to wander around Ottawa would normally have been a welcome gift but, this time, ominous signs were impossible to ignore – “the first masked pedestrians, and the first conscious and careful maintenance of personal space in public thoroughfares.

“I became aware that impatience, yearning, and worry were building up inside me, pulling me like a compass towards the airport,” she writes.

Once home, and as lockdown descended, Kalter describes the stupefying effects – call it stuplimity if you will – of isolation, when the brain just isn’t up to the task at hand.

Perhaps most disturbing, she confesses, is the “weird lake of anger simmering just below the surface of only mildly frustrating everyday interactions.”

Specifically, she admits feeling anger for those blithely going about their lives as if the pandemic didn’t exist, mingling freely with no attempt at physical distancing, blissfully free of masks, “generally following a pre-pandemic delineation of recreation and fun.”

Then there are the frayed nerves of others she encounters in the city. The man on a bike who stops at a light and yells, as if to the entire world, “I’m f—ing tired of you! You can’t f—ing do this! I’m tired of your f—ing mask!” Or the woman trying to enter a library without a mask, pleading that she “just needs to get a book,” as if the virus would excuse the intrusion just this once.

COVID denialism and the blind rejection of science challenged Kaler in ways she had never been challenged before, she writes, more than religious beliefs or other forms of faith in the supernatural, which, in her assessment, at least offer some form of rationale.

“I am realizing that there are people out there who not only reject scientific explanations for the virus or for the particular shape of the pandemic but who also do not have a replacement episteme.

“They aren’t saying the pandemic is ‘part of God’s plan,’ or ‘cosmic vibrations’ or ‘collective unconscious,’ or whatever. It’s just – no, no, no. Deny, deny, deny.”

To survive the pandemic, Kaler realized that she had to shed some of her innate urban snobbery – an unapologetic bias for the cultural supremacy of big centres like Toronto, Montreal and Vancouver – and learn to love, or at least like, Edmonton.

She worked at “inhabiting” the city, walking its trails, exploring the river and “really looking at my neighbourhood, instead of just passing through it,” she writes.

“In short, I was an obnoxious elitist and that elitism got knocked out of me while I was tethered in Edmonton by the virus. I don’t miss it at all.”

Kaler’s reflections end roughly a year later when she receives her first vaccine shot in the spring of 2021. It has her waking up “feverish, aching, and shaking, as though frozen to the bone.”

The discomfort of the reaction was also accompanied by the innocent optimism of those early days of vaccine rollout, the thought that it might herald the beginning of the end.

“Once the vaccine was in me, the ambiguity and what-ifs and indeterminacy of the past year receded,” she writes.

But those days of naive hope were short-lived. Although the symptoms are not severe, Kaler is currently recovering from COVID.