Covid-19 news coverage based more on #fearporn than science

It has long been accepted both within and without the world of journalism that negative news trumps developments of a positive nature pretty much every time.

Much may have changed in how news is delivered to people but the old cliches – “if it bleeds it leads” and “newspapers don’t report when airplanes land safely” – still apply. Whether this is a good thing for society is a point for more thorough examination in the future. For now, it is of no interest whatsoever to those operating news organizations producing what they call “public interest journalism” and begging the federal government to legislate its salvation. What matters is that shock, controversy and fear attract readers, listeners and viewers. As such, the preference for bad news represents a foundational bias within an industry that sells itself on its impartiality. Go figure.

So, headlines such as “Officials warn of 3rd Wave sparked by COVID-19 variants as Canada surpasses 820,000 cases” are far more common than “Daily COVID-19 case count drops 75 per cent in seven weeks,” which is equally true (but you generally have to figure that out by yourself).

What is less easy to understand is the news bias for one set of bad news at the expense of another. So while chief medical officers of health (CMOH) such as Dr. Theresa Tam (Canada), Dr. David Williams, (Ontario), Dr. Horacio Arruda (Quebec) and Dr. Deena Hinshaw (Alberta) roll out their morbid numbers and fears at daily news conferences, there has been much less frequent scrutiny regarding the consequences of their recommendations beyond the spread of the virus and its impact on health and the health care systems.

Morbid matters are, of course, extremely serious and the doctors are wise to stay in their public sector lanes where their sole focus is on a public health emergency. What is remarkable is that so many media see the world through the same tapered lens when the pandemic’s impact is much, much broader.

This isn’t just a public health emergency; it’s a public emergency with an impact on all segments of society. Oh, for sure, some press gallery types see issues such as the torpid rollout of vaccines in Canada through a political perspective. For them, the big issue isn’t that the vaccine debacle will cost thousands of people to unnecessarily die. It’s that it has an impact on Prime Minister Justin Trudeau’s popularity.

It’s fair enough that daily numbers aren’t available regarding unemployment, bankruptcy, despair and mental health. Nor are statistics showing how CMHO-advised restrictions disproportionately impact different groups in society. Yet why, one might ask, are the CMHOs and their political minders so rarely asked by journalists to what extent they consider such consequences?

For instance, a report last month by CIBC Economics showed that most of the hundreds of thousands of Canadians who lost jobs due to the restrictions sparked by the pandemic made $27.81 an hour or less, with the heaviest burden falling on those with an hourly wage under $13.91.

Meanwhile, those Canadians making the lockdown decisions have done just peachy, according to the report. Higher income workers – those earning wages greater than $41.73 an hour – actually experienced net job gains.

“The surprise here is that, not only did high-wage earners not experience job losses, but in fact they have gained almost 350,000 jobs over the past year,” the report said. “There is little doubt that those numbers (the gap between the lower and upper income classes) will get worse in the coming months.”

These results were generally mirrored in a report issued last week in the United Kingdom by the Resolution Foundation think tank that, according to The Guardian, pointed out:

“As the generation to experience the toughest squeeze on pay following the 2008 financial crisis, the report warned that almost a quarter of Millennials – born between 1981 and 2000 – currently work in shuttered sectors, compared with 16 per cent of working Baby Boomers and other older adults born before them.”

So much for “we’re all in this together.”

These are big problems. Other impacts of the restrictions used to limit the spread of Covid19 paint an equally grim picture.

These developments don’t go entirely ignored, but do they get headlines such as this one leading the website of the Hill Times – an influential publication serving policy makers and lobbyists in Ottawa – recently? 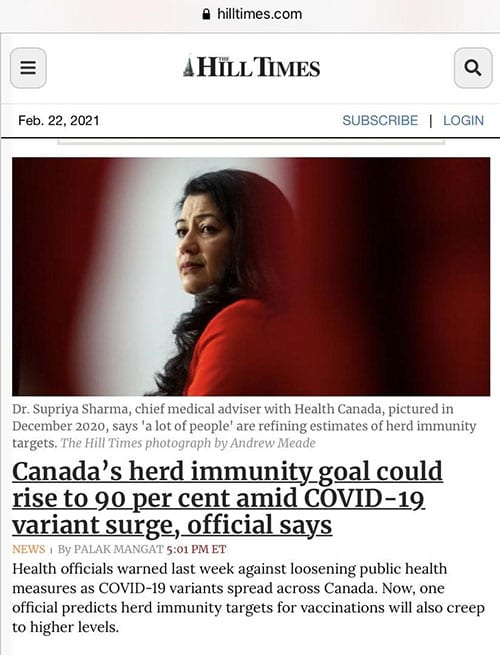 The answer would be no.

The frustration within what is often described as the real world is clear. 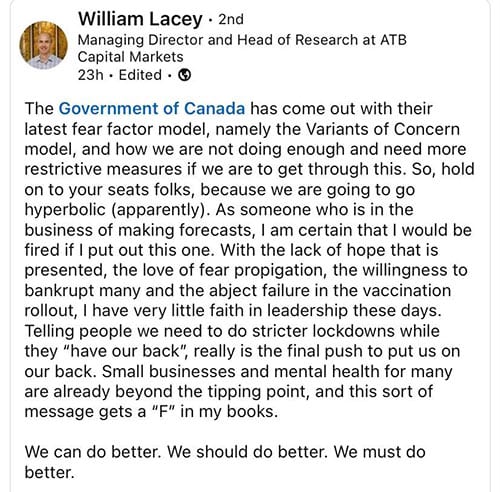 Lacy and others may be losing their faith in public servants but through the past year, the majority of news reporters appear to have retained theirs.

There are exceptions but overall they seem largely unbothered by further statistics showing that rates of domestic violence and divorce are rising due to the restrictions. And then of course there are those hundreds of thousands – if not millions – delaying checkups, surgeries, etc. that will in turn lead – to steal a CMHO phrase – to adverse outcomes.

All of these statistics are easily accessed on the Internet, but #fearporn still seems to capture the headlines and lead the news.

CMHOs have a perilous, difficult task. We are all grateful for their hard work during a difficult time. But their decisions have a far greater impact on the public sphere than the daily COVID-19 numbers with which they are rightly concerned.

In a healthy society and in times like this none of us can claim to have the right answers. But our chances of finding them won’t be improved unless media ask the right questions.

That they fail to do so may be understandable given the focus within the news industry on its own problems.

But it’s not forgivable.

Peter Menzies is past CRTC vice chair of Telecom, a past publisher of the Calgary Herald and is a National Newspaper Award-winning journalist. He also advises tech companies but his views are always his own.