Moving on: nature migrates as winter closes in

On the Pacific coast, the fascinating fall movements of whales, salmon and sea ducks have begun

One evening recently at about 6 p.m., I heard a familiar sound from the sheltered bay just in front of our house at Skelhp. If you’ve never heard it, it can be bewildering, even frightening. It’s very loud blasts of air – sometimes two or three in succession, sometimes with about a minute’s silence before they’re repeated.

To the uninitiated, these blasts can sound vaguely industrial – like a piece of equipment run on compressed air.

The noise always motivates me to drop what I’m doing and run down to the beach. And there, invariably, are humpback whales travelling.

For the past three years, their time of arrival has varied, ranging over late spring to the last weeks of October. A mating pair have been reacquainting themselves with Jervis Inlet and Hotham Sound, once the site of an inshore whaling industry based just to the north at Whaletown, on Cortes Island. The old whalers pretty well fished out our waters by the early 1900s.

Now the returning whales are having to recolonize their bays and sounds without the benefit of the humpback traditional ecological knowledge that I believe once existed, to be passed down from generation to generation through the annual paths of travel. 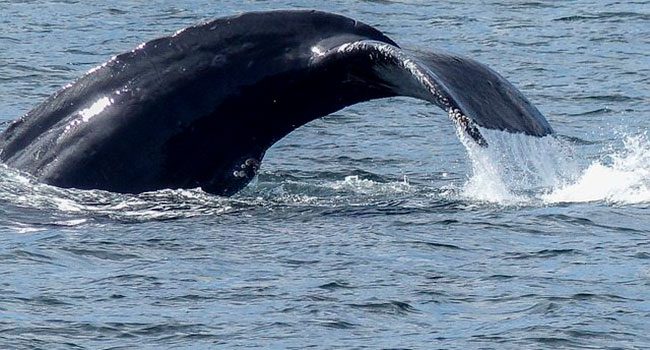 Our current humpback family has a newborn calf, maybe three metres long. I only realized its presence when I spied a tiny tail raised between the adults as they dived in unison just offshore in front of our house.

Three days after this passing heading east, they returned on the far side of the inlet. Here they were breaching and falling seaward with loud claps of whale-body thunder, as they filter-fed for tiny crustaceans like krill and perhaps herring off Ball Point. After about an hour of this, they turned south and headed out to the open waters of the Salish Sea.

Presumably we’ll see them all again next spring, when they return north from wintering in Mexican waters.

While the humpbacks are the most dramatic migrants in our fall coastal world, the ocean is also full of returning chum salmon, the last spawners before winter. The chum were important staples in the local Indigenous peoples’ diet, because they have the highest oil content of all the five species of Pacific salmon. As ideal smokers, they can be preserved for eating throughout the winter months.

We notice the presence of the chums by the feeding frenzies they induce in the local Steller sea lion population. At first light each morning, a raft of four to six Stellers travels quickly into Skelhp bay to harvest chum.

There are multiple, audible tail slaps as the big sea lions dive for the salmon. And overhead, a flock of screaming herring gulls gathers in anticipation of what comes next.

Horsing up from the depths, at least one of the Steller’s heads bursts from the waters, shaking and snapping its jaws on a big, writhing chum. Soon pieces of fish are flying in the air, to the delight of the gulls and the other sea lions that have popped up to share in the breakfast feast. By now the ravens are also aware of what’s up and their haunting croaks rise to enter the evolving sound mix.

While all of this is happening, it’s not unusual to see flocks of sea ducks like mergansers and black scoters crossing the bay in tight formations. They too are heading south just as the overnight temperatures approach 0C. Soon Skelhp’s skies will only be home to the resident gulls, ravens, eagles, Steller’s jays, kingfishers, woodpeckers and western crows.

Up at the garden, the last of the early girl and mortgage lifter tomatoes have been picked. And the dead squash, broad bean and tomato plants have been pulled up and dug into the compost pile.

The deer hoof trail around the outside perimeter of the garden fence is still active and especially at dusk, we can see the doe with her triplet yearling fawns looking back at us from the top of the gravel road. So far, they’ve all escaped notice by the cougar.

Back at the house, a pile of fir rounds awaits our annual Wood Camp weekend, when Steve and Ade come from Sooke and Sechelt to help get our winter wood pile cut and stacked. Winter is now in our sights.

Nature, Rural Life, Things to do in BC