Hot-stepping and hacking through game levels

Ready for more Apple Arcade? You’re already reading so I’ll take that as a yes.

This time I’ll look at somber action-combat game Bleak Sword, as well as taking part in some schoolyard parkour with Hot Lava.

As always, these aren’t intended to be full reviews but rather a general feel for how each game plays and my first impressions. 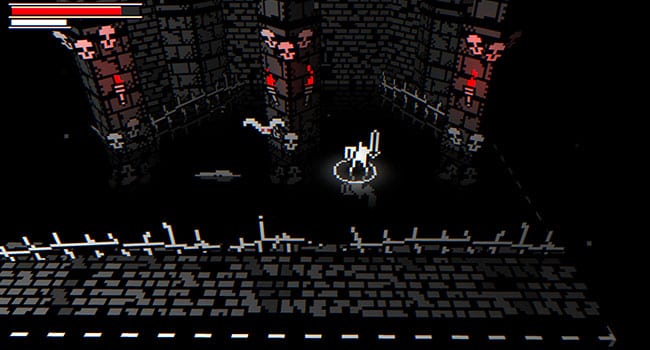 “Bleak” is the perfect way to describe this game, and that’s not a negative.

Bleak Sword is a pixelated action-combat game where the fighting takes place on small, square, diorama-style arenas. The combat and gameplay are brutal. Most aspects of this game can be described using two words: simple and brutal.

You’re primarily going to see three colours: white, black and the occasional shock of red. Maybe some shades of grey in there.

The ponderous, dour music sets the tone for a world that has lost hope. It ramps up in battles but all the audio has the same message: there’s danger everywhere and you’re likely to fail.

Each level is a self-contained combat sequence. The controls are basic: a dodge button, an attack button and the left stick to move. To attack, hold the button and release; if you only tap the attack button, that becomes a parry. This was one thing I wasn’t crazy about. One button for two important actions felt counter-intuitive and it was hard to wrap my brain around sometimes, though I did eventually get the hang of it.

The fights get very tough and each requires focus. Some took several tries before I could crack it but when I did, I cheered. As I progressed, I found I had to rely increasingly on the meagre tools at my disposal, mainly effective parrying and dodge rolls. You have to pay close attention to how each enemy moves to know the best moment to parry.

If you fail a level, you lose your experience and items (you can carry two). You have one more chance to pass the level to get your stuff back. If not, it’s gone forever.

Bleak Sword sounds rough and it is, but that’s exactly why it’s fun and rewarding. The visual style, the music and the gameplay conspire to create a sense of ever-present danger and hopelessness. And that makes it all the more thrilling when you succeed. 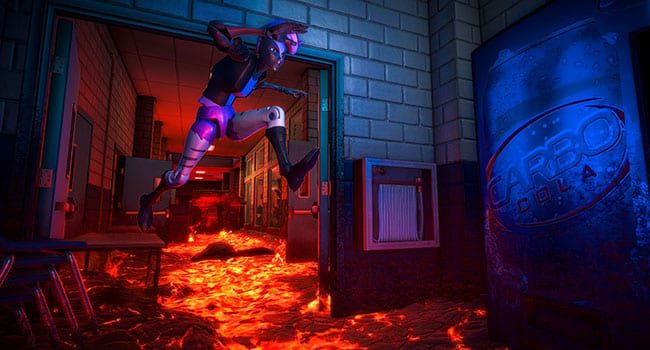 Hot Lava is a fun and fast game of “Don’t touch the floor,” that game we all played as kids at one time or another. Except this time, it’s actually lava.

The game opens with an amazing 1980s or ’90s style cartoon sequence with even more camp than you remember. It’s absolutely wonderful and the homage is spot on.

When you begin the game, the camera zooms out from the TV and you’re sitting beside your sister, who is, inexplicably, a life-sized action-figure version of a girl. You play as an action figure as well – an action figure from the show you were watching at the beginning.

This all makes sense, right?

You parkour your way through your school, a playground and more, hopping from chairs to trampolines to slides. Fall into the lava and you’re quickly put back at the most recent checkpoint, so the action stays fast.

You select a world (your school gym, the playground) and then play a course within each world. More courses open as you complete them. Each course (that I’ve experienced so far) has you seeking a glowing green emblem a little way in the distance. When you reach it, a new one pops up further on, until eventually you get to a final blue emblem.

The game has a few ways of padding out the gameplay, some good, some bad.

When you complete courses, you get a bunch of bonuses: new characters to play, new goofy accessories to style your action figure with, new courses unlocked. It was always fun seeing what ridiculous new hat I’d earned and then immediately putting it on.

There’s an online aspect to Hot Lava, so all those hats will actually be seen by other people. I didn’t really engage with anyone but there were always a few other people running around the school with me.

There are a few performance issues, including one full crash. Otherwise, I just experienced the occasional drop in frame rate.

Despite these technical issues and some unnecessary collecting, I had fun with Hot Lava. It’s a simple, fun concept and the levels get more challenging and interesting as you go (I was jumping through a bouncy castle in one and climbing through the vents of my school in another).

It’s fun, quick, easy to pick up and has a neat esthetic. I will definitely play this game more. It’s not as if I have almost every other Apple Arcade game to report on still. …

And there you have it! Two easy-to-recommend ‘Plays.’ I’m sure everything will be this shiny and fun next time, too.