A tale of two Camrys: XSE and TRD

For the past four decades or so, the two top-selling sedans in Canada have been the Honda Accord and Toyota Camry, not necessarily in that order.

Not hard to see why. They’re both comfortable, competitively priced and – most importantly – reliable people carriers. They may not always get the blood pumping, but they do the job competently and faithfully.

The Camry, in particular, is synonymous with sensible, dependable family transport and I recently spent time with two models: the XSE and hot-rod TRD.

Roughly in the middle of the lineup, the XSE is powered by a 2.5-litre four-cylinder engine, mated to a continuously variable transmission (CVT). This drivetrain is used throughout Toyota’s model range and they don’t even tell you what kind of transmission it is anymore; it’s a “sequential shift mode” unit, which apparently has eight speeds. But a CVT by any other name is still a CVT. Since this is the car’s weakest link, they should tell you at least what you’ve got.

The XSE has shift paddles on the steering wheel column and you can choose from three modes: Eco, Normal and Sport. I just left mine in Normal, as will the majority of drivers, I suspect.

With the four cylinder engine, the Camry isn’t exactly a road rocket and the CVT doesn’t help. It’s vague, lethargic, disconnected, unresponsive and it could be a deal-breaker for me, were I in the market for this car. Yes, you can shift gears but it just doesn’t feel right, somehow.

The XSE is loaded with standard features. Heated front seats, leather upholstery, multi-information display system, backup monitor, wireless charging and so on are all standard with this one. So are the usual safety features, such as traction control, hill assist, vehicle stability system, lane departure alert (easily disabled), radar cruise control and so on.

A couple of levels up from the base LE, the XSE also has slightly more power than the other four-cylinder models, as well as tuned suspension and larger 19-inch wheels and tires, plus available all-wheel drive.

With a starting price of just under $35,000, the Camry XSE fulfils Toyota’s mandate for comfortable, user-friendly, five-passenger transportation. I really didn’t like the CVT and $35,000 seems a little on the pricey side. Otherwise, absolutely no complaints.

Just for the sake of argument, you could get a base LE for about $10,000 less and still get the same driving experience.

The TRD is also an XSE model, but with extras. Power is delivered via a 3.5-litre V6 engine that develops 301 horsepower. It too is mated to that CVT, and the TRD is also all-wheel drive.

It has a slightly different interior than its stablemates, with mixed fabrics and special trim. Tasteful but not gaudy. 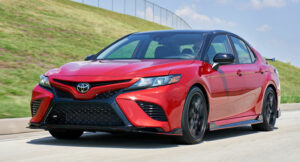 The V6 is also much better suited to the CVT than the four-cylinder. Because of its additional power and torque, it’s a much livelier and more responsive car. And the ambiguity of the transmission is overcome by the extra power. It all works well and the TRD is huge fun to drive.

Helping things along are a tweaked sport suspension and a lovely tuned exhaust system that gives out just the right amount of growl without being obnoxious.

You can hear the transmission shifting while you’re driving, and the ratio changes are quite noticeable.

I was pleasantly shocked at the stickiness of the TRD and it loves the corners. But note that the tires are low profile and you can easily bruise or damage them if you hit a curb while parking.

None of this comes cheap, however. Before taxes and extras, the TRD is close to $41,000.

Is it worth the extra money?